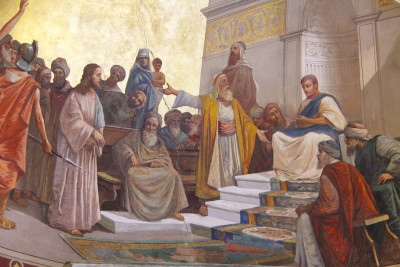 “If the world hates you, know that it has hated me before it hated you.”

I am observing some of the same challenges to Influencers that Jesus had in His day.  We should not be surprised if it comes to those who are trying to live out our lives to His honor and embrace our sacred responsibilities that He entrusts to us as we follow Him.  In fact, He said it would happen.  Now I realize that many of us have not seen a lot of the tribulations in our life that He spoke of that would come to His family.  I haven’t.  But they will eventually come, and maybe it is starting now.  Let me share with you some of our observations:

Who hated Jesus?  Well, there are some obvious people who we read about.  First it was the religious hierarchy of the day.  They were the extremely, outwardly religious, and prideful religious traditionalists.  They understood the scriptures intellectually, but they didn’t understand or practice the heart of them and missed it all together.  These people tried to pull Jesus into their way of thinking and when that didn’t work, they shut Him out altogether and had Him killed.

We know the Romans hated Him.  They were stirred up by those religious, heartless leaders to hate Him.  Still, they inflicted on Him the cruelest torture and death that has ever been conceived.  Hate was their middle name and Satan inspired it, as he does with all hate.  Remember this.  Satan inspires all hate, and we are seeing it in this country as never before.

Were there any other haters of Jesus?  Yes, there were, and they came from people who once followed Him.  One day they were waiving palm branches and shouting, “Hosanna!  Blessed is he who comes in the name of the Lord! Blessed is the king of Israel!” and only a few days later they were shouting, “Crucify Him!”  Therefore, what we see are three sides against Him and one was an enforcer who would vent its hate on Jesus in a painful way.  He was facing three hate-mongers … alone.  Maybe we might see the same thing forming against Christians today?

So, what are the three challenges that Christians will be facing, if we continue to follow Jesus and carry out our mission and purpose that He has entrusted to us.  I’m already seeing three sides of opposition developing.  One side is a lost generation of people who are being duped into a political, social reform agenda that tries to teach that right is wrong and wrong is right.  The leaders of this movement are small in number but wield a lot of influence on ignorant, unsuspecting people.  They have taken this movement into some churches and it is creating confusion there.  As should be the case with all Christians, our mission as a ministry is to un-confuse Christians and we all go back to Jesus.  Then we are ready to reach out with the true Gospel of Christ.  We do this by way of His grace and love and His Word.

Like Jesus, we build relationships so that we can transfer Biblical truths.  Like Him we do not demand that confused and sinful people have to change to be welcomed by us, for we feel that once they enter an intimate, abiding relationship with Him they will conform to Him and His ways.  I truly believe that this is the only way that a confused seeker of Christ will change and embrace and conform to Biblical guidelines concerning morality and behavior.  It will not happen if we demand it first.  It happens when they get to Jesus first.

Look at all the sinners of all kind that Jesus welcomed to Himself. He didn’t demand that they change first.  He said, “Come,” and it was in His presence and by His influence they changed.  Influencers is seeing the message of abiding in Christ to be the greatest path to Biblical change that we’ve ever witnessed.  Because of this you better believe the influential forces behind the confusion with the social reform agenda that is being brought into churches and confusing Christians and Seekers alike will hate us.  They will hate us for Jesus changes people, and they want to keep them away from Him because of it.  Our mission is to get them to Him. That’s one front I see developing against Christians.

Front two:  Strange as it may seem Jesus was rejected by the religious “right” because they thought He was too soft on His condemnation of sinners and tax-collectors and prostitutes.  Sometimes I hear the same voice from self-righteous Christians who imply the same thing against us when we welcome people whose choices are offensive to them.  These forgetful people disregard that it was by the grace of God alone and their faith in Him that they were saved.  None of us deserve it.  All of us come to Him as sinners and hopelessly lost. We can’t be good enough to be accepted by Him.  But neither can we be bad enough to be rejected.   They forget this truth, and this is where Christ’s strategy to welcome all seekers who want to know Him can receive criticism and judgementalism just as Jesus received it.  How does this happen in Christians?  It happens when we have lost our first love, and our first love is this:

“In this is love, not that we have loved God but that he loved us and sent his Son to be the propitiation for our sins.”  1 John 4:10 ESV

For any of us who feel that someone is not redeemable or too deep in sin for us to go after them I will remind them that Jesus entered our sinful condition, though it is terribly offensive to a Holy God, and came after each of us … in love.  He set us free from sin’s bondage and then leads us to a better life with Him.  As Christians there are a lot of offensive things that we must co-exist with in this world as long as we live here.  However, we are not to embrace these things into our life.  God hates those things, and we should hate evil as well.  But we are not to hate people who carry these sins for God loves them and wants to set them free from their bondage to sin.  Let’s hate sin but not hate people.  Let’s return to our first love and be reminded of our own terrible conditions that God saved us from.  If that doesn’t remove our hard hearts and our condemnation of others, then I will say that this person has a more serious condition than the sinners he or she condemn.  Ask the Pharisees, if they could answer.  I think they can now see how wrong they were.  But it’s too late for them.  Don’t let it be too late for any of you.

The third front, like the Romans, is a government that is becoming hostile toward Christians.  It too is under the influence of people who are led by evil, and who want to stamp out Christianity and Christians.  If it keeps going as it is, then like so many other hostile governments in history who have persecuted Christians, we may see them crashing through our doors as well.

I know this sounds sad and even discouraging in ways, but it doesn’t end there.  Therefore, I’d like to close this serious and possibly dark forecast of our future with words Jesus spoke specifically for the times we are in.  Let’s let Jesus’ words be the last words.

“I have said these things to you, that in me you may have peace. In the world you will have tribulation. But take heart; I have overcome the world.”